Reliability
4.0
Out of 1 Ratings

When it comes to products, Reliability rates high in importance. Your Clothes Dryer’s ability to perform and maintain its functions during everyday use, as well as extreme use or under unexpected circumstances, is important when making purchase or repair decisions.

Durability
4.0
Out of 1 Ratings

How will your Clothes Dryer hold up over time and withstand the wear and tear of constant or long-term use? A product with strong Durability is a product that was made to last and provide a good ownership experience over it’s lifetime.

Maintenance 4.0
Out of 1 Ratings

Most Clothes Dryer owners intend to keep their Clothes Dryer in good working condition. Knowing up front if the Maintenance or repair of a product is easy or difficult can have a profound impact on your decision to make a purchase.

Performance 4.0
Out of 1 Ratings

Clothes Dryer's that are purchased and meet or exceed expectations usually share the trait of good Performance. Feeling that a product was worth the purchase because it does everything you expected, and does it well, is a clear indicator of a product that truly performs.

How hard is this Clothes Dryer to operate? If purchased, would tons of time be lost trying to figure out how it works? Simply put, Ease of Use is a measure of how easy a product is to use. Having this knowledge prior to purchase can help avoid buyer’s remorse. 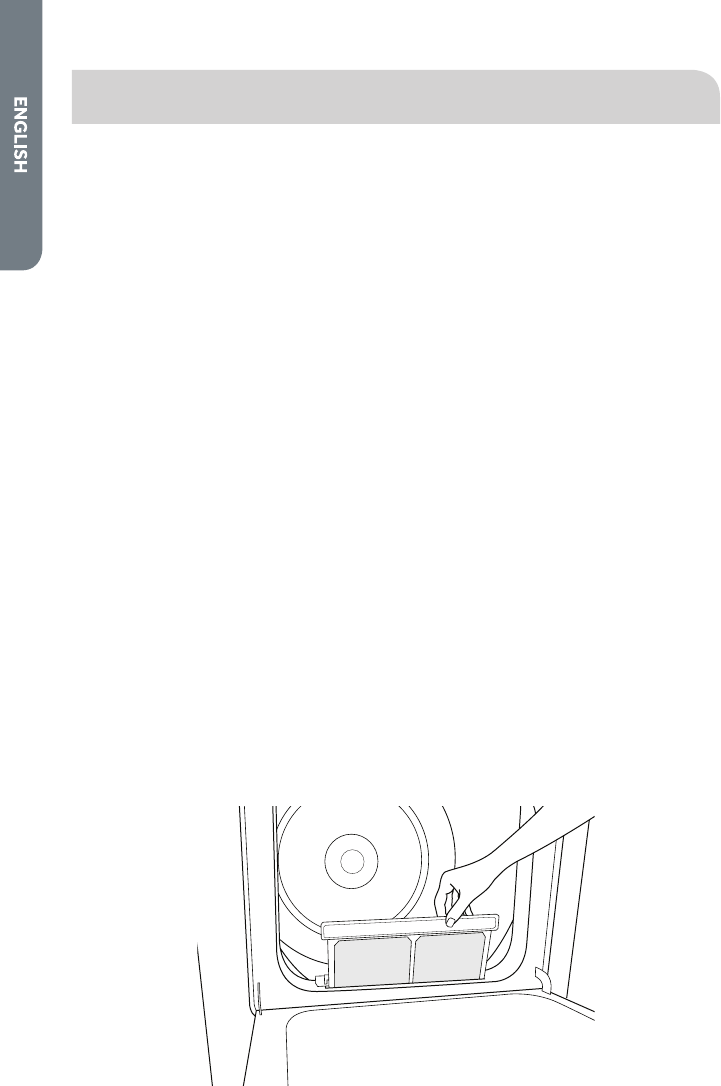 22
Status lights indicate the progress of an operating drying cycle.
OPERATING INSTRUCTIONS
STEP 1 - PREPARE AND SORT LAUNDRY
•
Check garment labels for manufacturers’ drying instructions.
•
Where possible, turn pockets inside out for uniform drying.
•
Tie strings and sashes so they don’t tangle.
•
Close zippers, snaps and hooks to avoid snagging.
•
Make sure buttons and ornaments on the clothes are high temperature resistant
and will not damage drum surface.
•
To avoid permanently setting stains or soils, check that all stains and soils have
been removed during the wash cycle. If not, wash them again.
•
To avoid entanglement and ensure easy removal, small articles should be
collected in a mesh bag before loading.
•
Separate fabrics that attract lint from fabrics that give oǋ lint. Clothes prone to
linting should be turned inside out before being put into the dryer.
STEP 2 - CLEAN THE LINT SCREEN
1. Clean the lint screen before each use. The ǌ lter can be removed by pulling on the
handle of the lint screen located inside the dryer door.
2. Use your ǌ ngers to roll the accumulated lint oǋ of the lint screen. Do not rinse or
wash the lint screen to remove lint.
3. Slide the lint screen back into place.
NOTES:
•
Do not operate the dryer without the lint screen in place. Without the screen,
tumbling garments could enter the exhaust system and cause damage to the
dryer.
•
Lint buildup on the screen will restrict airǍ ow and cause longer drying times.