When it comes to products, Reliability rates high in importance. Your Flat Panel Television’s ability to perform and maintain its functions during everyday use, as well as extreme use or under unexpected circumstances, is important when making purchase or repair decisions.

How will your Flat Panel Television hold up over time and withstand the wear and tear of constant or long-term use? A product with strong Durability is a product that was made to last and provide a good ownership experience over it’s lifetime.

Flat Panel Television's that are purchased and meet or exceed expectations usually share the trait of good Performance. Feeling that a product was worth the purchase because it does everything you expected, and does it well, is a clear indicator of a product that truly performs.

How hard is this Flat Panel Television to operate? If purchased, would tons of time be lost trying to figure out how it works? Simply put, Ease of Use is a measure of how easy a product is to use. Having this knowledge prior to purchase can help avoid buyer’s remorse. 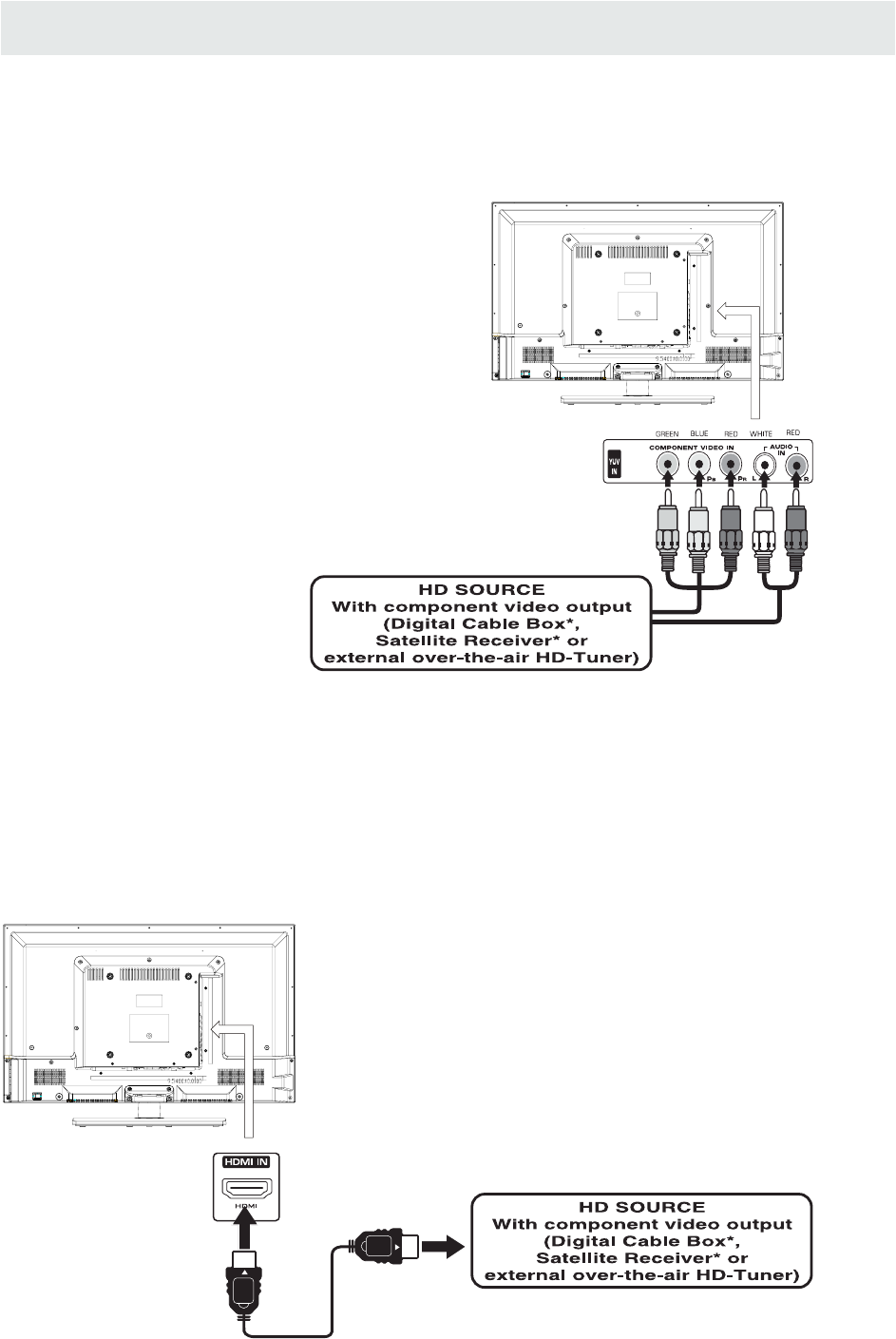 CONNECTIONS
CONNECTING A HIGH-DEFINITION (HD) SOURCE USING CONNECTION
NOTE
COMPONENT
High-Definition (HD) Devices with component video output must be connected to the Y input.
Connect the component video cable and audio cable (not included) as shown.
Make sure you connect the component video cable and audio cable from the other equipment
When connecting a DVD player to the television,
the picture resolution is solely dependent upon
the resolution supported by the DVD player attached.
DVD player resolutions vary from 480i to 1080i.
and this television can support DVD players up to
a maximum resolution of 1080i.
PbPr
* May require a subscription
for receiving HD channels,
check with your cable/satellite
service provider for details.
To COMPONENT
VIDEO OUT jacks
CONNECTING A HIGH-DEFINITION (HD) SOURCE USING HDMI CONNECTION
HDMI (High Definition Multimedia Interface) supports both video and audio on a single digital connection
for use with DVD players, DTV, set-top boxes and other digital AV devices. HDMI was developed to provide
the technologies of High Bandwidth Digital Content Protection (HDCP) as well as Digital Visual Interface
(DVI) in one specification. HDCP is used to protect digital content transmitted and received by
DVI-compliant or HDMIcompliant displays.
HDMI has the capability to support standard, enhanced or high-definition video plus standard to
multi-channel surround-sound audio. HDMI features include uncompressed digital video, a bandwidth of
up to 2.2 gigabytes per second (with HDTV signals), one connector (instead of several cables and
connectors), and communication between the AV source and AV devices such as DTVs.
To HDMI
IN jack
To HDMI
jackOUT
To COMPONENT
VIDEO IN jacks
AUDIO IN jacks
To COMPONENT AUDIO
OUT jacks
Connect the HDMI cable (not included) as
shown:
Make sure you connect the cable from the
source equipment ( ) to this unit
( ).
HDMI OUT
HDMI IN
HDMI CABLE
(NOT INCLUDED)
（COMPONENT OUT and AUDIO OUT）to the unit COMPONENT IN.
COMPONENT IN
To COMPONENT
9
Y(VIDEO)Y(VIDEO)